What is RSV (Respiratory Syncytial Virus)?

Respiratory viruses are common in children under 5, particularly those who attend daycare or are exposed to tobacco smoke. Most cases are mild, but for some children, the symptoms could actually be respiratory syncytial virus (RSV).

RSV is a common respiratory virus. By the time children are 2 or 3 years old, most have been infected by RSV at least once, with few problems. Yet, for some, the virus can be life-threatening. And the infection sends more babies to the hospital than any other condition.

RSV is caused by the respiratory syncytial virus. Infection occurs through exposure to droplets of the virus or contact with an infected surface.

RSV is very contagious. It can be spread through droplets from an infected person’s cough or sneeze. The virus also lives on surfaces, so touching something like a doorknob and then touching your face can also spread the disease.

How long is RSV contagious?

Most people with RSV are contagious for 3 to 8 days. However, some infants and people with weakened immune systems can spread the virus for as long as 4 weeks.

Symptoms of RSV typically develop within 4 to 6 days of infection. The symptoms don’t appear all at once, but in stages. Parents and caregivers of children with asthma, premature infants, and elderly people need to be vigilant during RSV season. Learn to recognize the warning signs and seek medical treatment as soon as possible.

Infants are the most seriously affected by RSV. In the youngest infants, symptoms may only be irritability, decreased activity, and breathing difficulties.

RSV starts as an upper respiratory infection, with familiar cold symptoms. What makes it so dangerous is its ability to quickly spread down from the nose and throat into the lower respiratory tract. From there it infects and causes inflammation in the tissues of the lungs (causing pneumonia) and the tiny bronchial air tubes (causing bronchiolitis).

Inflammation is the body’s natural process for fighting infection. But in tiny infant airways or those already inflamed by asthma, it can cause increased airway obstruction and difficulty breathing.

Another danger of RSV is that a serious RSV infection in young children increases the child’s risk of developing asthma in later years. Researchers do not know exactly why this happens. It may be a cause-and-effect reaction. The RSV infection may damage the lung, which leads to asthma. Or it may just be an association, where factors that put children at risk for asthma also put them at risk for a more serious RSV infection. RSV and other viruses have also been linked to an increased risk of sensitization to allergens and development of allergies.

How does a baby get RSV?

Babies can be exposed to RSV in a variety of settings, but daycare is a common source. 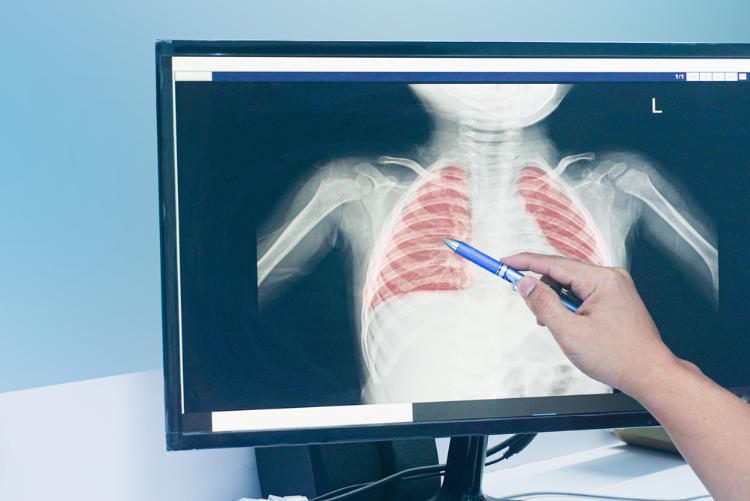 When to take a baby with RSV to the hospital

While many cases of RSV can be treated at home, sometimes the illness is more severe requiring hospitalization. An estimated 58,000 children under the age of 5 are hospitalized every year with RSV.

Those most vulnerable include:

Call 911 or take your child to the emergency room for any of these symptoms: 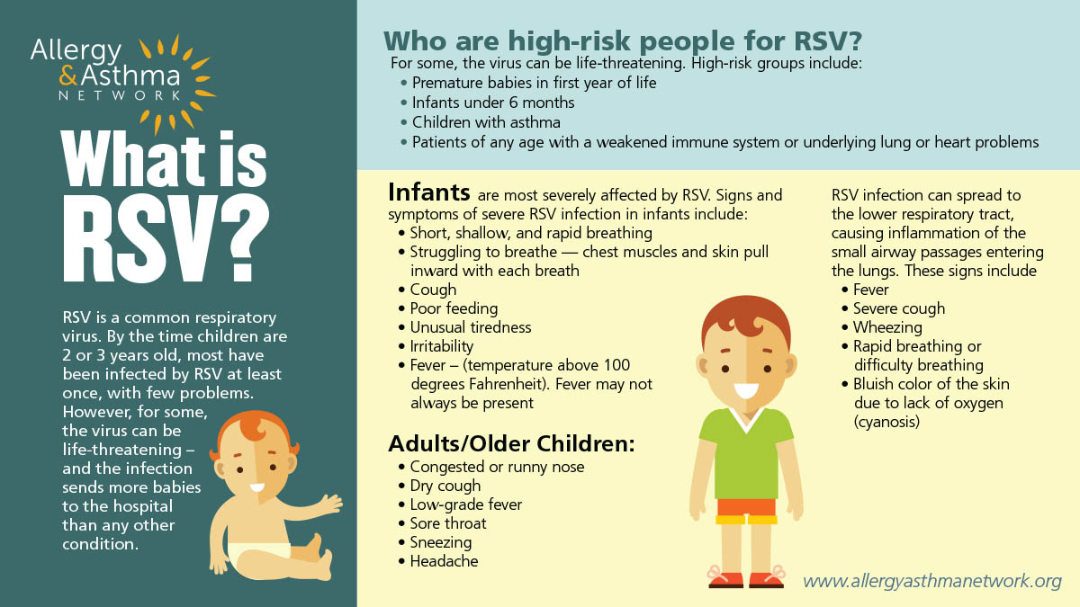 What is RSV Infographic Transcript

RSV is a common respiratory virus. By the time children are 2 or 3 years old, most have been infected by RSV at least once, with few problems. However, for some, the virus can be life-threatening – and the infection sends more babies to the hospital than any other condition.

Who are high-risk people for RSV?

Infants are most severely affected by RSV. Signs and symptoms of severe RSV infection in infants include:

RSV infection can spread to the lower respiratory tract, causing inflammation of the small airway passages entering the lungs. These signs include: 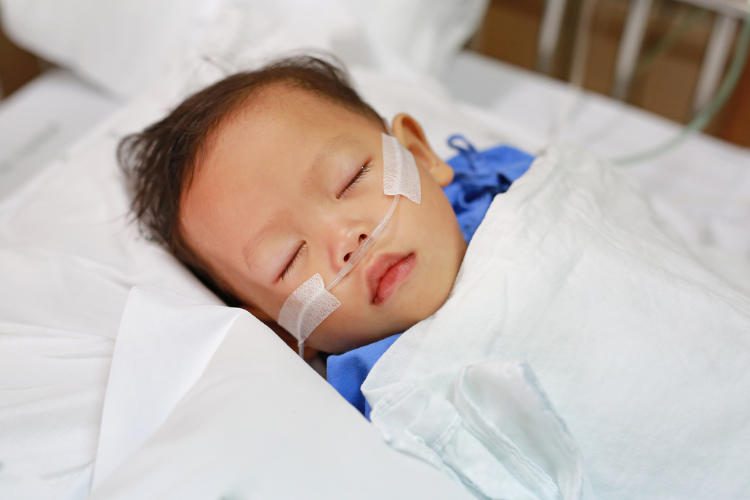 By the age of 2 most toddlers will have had RSV at least once. Yet, toddlers can become reinfected. For toddlers with chronic lung diseases, compromised immune systems, or neuromuscular disorders, it is important to remain vigilant.

Can adults get RSV?

RSV is also common among adults. Those particularly affected include people with asthma, COPD, cancer patients, those with either immunodeficiency or autoimmune disease. Also vulnerable are people in close contact with large numbers of people, such as senior citizens living within group settings.

When is RSV season?

RSV season in the U.S. occurs during the fall, winter, and spring. However, in 2021, there has been an unusual earlier spike in cases, beginning over the summer. This may be due to the COVID-19 mitigation efforts in the 2020-2021 fall and winter

How long does RSV last?

RSV symptoms typically last a few days to a few weeks. For many people, these symptoms may just appear like a common cold, but it can be more severe for some.

There are several tests available that can confirm a diagnosis of RSV. However, doctors often diagnose RSV based upon symptoms. But, if an infant, young child, or older adult has serious symptoms of an infection, a doctor may perform testing to confirm RSV. 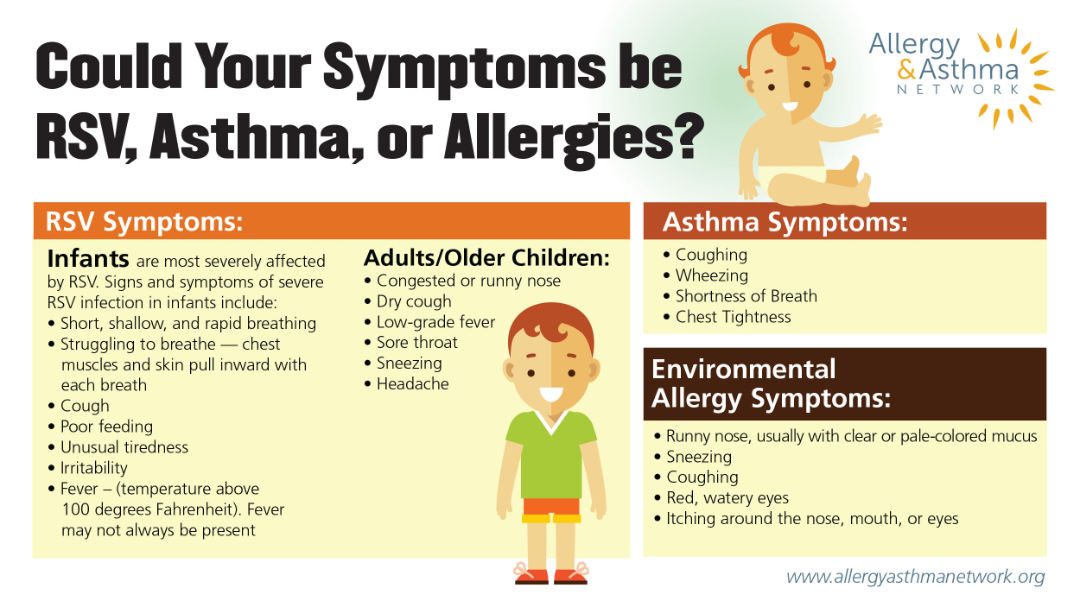 Could Your Symptoms be RSV, Asthma, or Allergies?

Infants are most severely affected by RSV. Signs and symptoms of severe RSV infection in infants include:

For many children and adults, RSV may appear just like a common cold. And, unless a person is specifically tested for RSV, they many never know they had it. But it isn’t “just a cold” and may be a more serious case of RSV.

Contact your child’s doctor if common cold symptoms are complicated by any of the following:

How does RSV spread?

RSV is a highly contagious virus. It is spread through inhaling droplets (such as from a cough or sneeze) from an infected person. It can also be spread through contact with infected surfaces.

There is no medical cure for RSV. Physicians focus instead on treatments that reduce congestion and open the airways so the patient can breathe. Serious cases require hospital care, intravenous fluids, nebulizer medications and oxygen treatments.

Some patients get secondary pneumonia as a result; this needs to be treated aggressively with antibiotics. Some transplant patients with severe disease may benefit from adding an antiviral agent – but the primary treatment is supportive care. 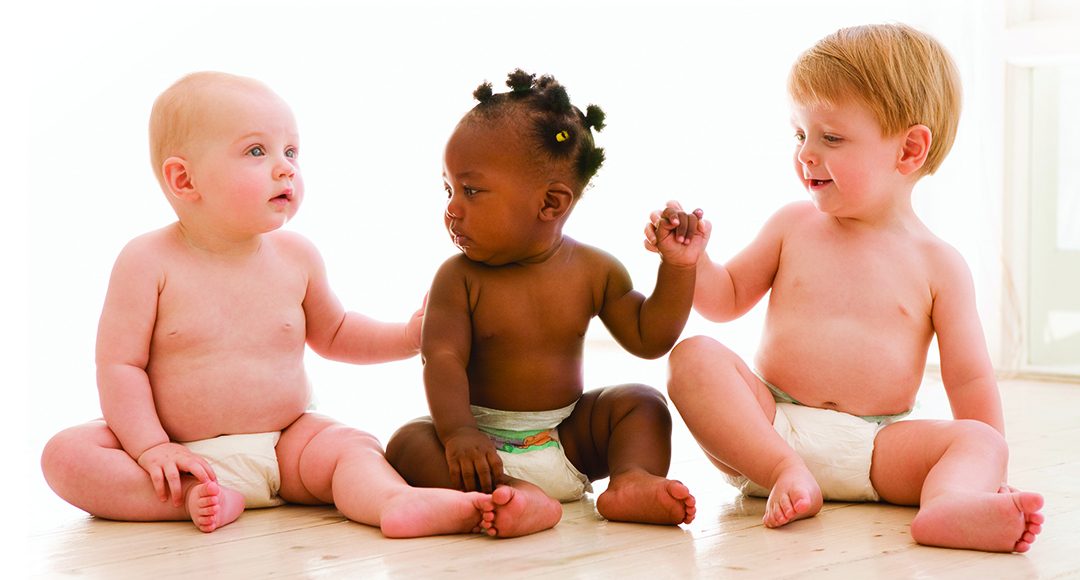 Even in babies, treatment for RSV is largely supportive care. This includes managing fevers and encouraging fluids. Some high-risk babies may qualify to receive a preventive medicine called palivizumab, given by injection every month during RSV season. Palivizumab is not a vaccine. If symptoms cannot be managed at home, the baby needs to be hospitalized.

How to treat RSV in toddlers

Treatment for RSV in toddlers similar as in babies. Make sure to keep the fever under control, encourage fluids. If symptoms do not improve at home, seek medical care.

The highly contagious virus can live on hard surfaces such as doorknobs and tabletops for days and spreads quickly through human contact, often before the infected person shows any obvious signs of the disease.

How to Wash Your Hands Infographic Transcript

How to Wash Your Hands

Issues for Babies with RSV: Insurance

Reviewed by:
Purvi Parikh, MD, FACAAI is an adult and pediatric allergist and immunologist at Allergy and Asthma Associates of Murray Hill in New York City. She is on faculty as Clinical Assistant Professor in both departments of Medicine and Pediatrics at New York University School of Medicine.